The largest earthworm ever recorded in the UK has been found in a vegetable plot in Cheshire, report Natural History Museum scientists.

Paul Rees from Widnes spotted the 40 centimetre-long Lumbricus terrestris in his vegetable patch. His stepson George named it Dave.

Emma Sherlock, Museum scientist and chair of the Earthworm Society of Britain is astonished by the find: ‘I was bowled over by the size of this worm when I opened the plastic box they sent it in. Not only is it really long, it is almost twice as heavy as any other wild earthworm ever seen, weighing the same as a small chocolate bar. I look forward to seeing if anyone can find an even bigger example by taking part in the Earthworm Watch survey this autumn.’

The worm weighs 26g, trouncing the previous largest worm found in Scotland last year, and will become part of the scientific collection at the Museum. The record for other wild earthworms is 15g. Earthworms have lots of predators and normally do not survive in the wild to reach Dave’s size.

Emma comments: ‘With worms this size Paul must have an incredibly fertile and well-drained veg plot with decaying matter quickly recycled back into the soil. Earthworms are incredibly important to keep soils healthy.’

Earthworm Watch is a survey of earthworms and soil quality run by the Museum and the Earthwatch Institute in association with the Earthworm Society of Britain.

Earthworms improve soil fertility and ability to store carbon by mixing in dead plant material, and their burrows increase the amount of air and water that can enter. The Earthworm Society of Britain is running courses and events up and down the country for people to learn more about these creatures 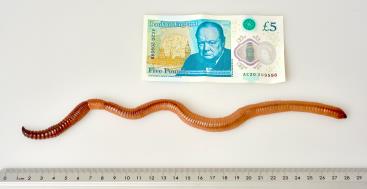