Launched by the Institut français in 2016, the NIGHT OF IDEAS is a project staged simultaneously in Paris, London and worldwide, taking place on Thursday 30 January 2020.

A major Franco-British event, the NIGHT OF IDEAS previously featured leading figures such as Nicolas Hulot, Thomas Pesquet, Timothy Peake, Posy Simmonds, Ken Loach, Anthony Grayling and Maggie Aderin-Pocock.
For the 2020 edition, the Institut français du Royaume-Uni, the Higher Education, Research and Innovation Department and the Cultural Department of the French Embassy are putting together a thought-provoking programme of debates, performances and screenings.

Crossing French, British and European perspectives, this new edition will engage audiences in free debates with the theme ALIVE as the common thread to tackle the latest ideas behind issues central to our times.
What does being alive mean today? Some say we’re on the brink of extinction. Some say we can build a new man. Earlier this month, a whale was found dead with 100kg of plastic in its stomach on the Isle of Harris, Scotland. In 2017, Sophia became the first robot to be granted citizenship, and while some saw in her the possibilities of the future, others found their worst nightmares realised. At a time when nature is threatened and technology seems all-powerful, let’s question, collectively, the borders of our humanity and rethink what was once taken for granted.

Scientists, artists, intellectuals and activists engage with these issues in many ways: through campaigning for animal rights, innovating sustainable fashion, creating works of art using AI, or developing domestic robots, they push the boundaries of art, knowledge and politics. The NIGHT OF IDEAS will bring them together to explore the changing shape of our lives and plant the seeds of new initiatives.

In the run-up to the NIGHT OF IDEAS, a film season, BEFORE THE NIGHT, will echo the different themes and the LITTLE NIGHT will invite pupils from British and French schools to reflect on the main topics.

The NIGHT OF IDEAS is organised by the Institut français and the Higher Education, Research and Innovation Department and the Cultural Department of the French Embassy, in partnership with Imperial College London, King’s College London, Bristol Festival of Ideas, York Festival of Ideas, the Maison française d’Oxford, the GoetheInstitut, Gallimard, and the Alliance Française network in the UK, among others. 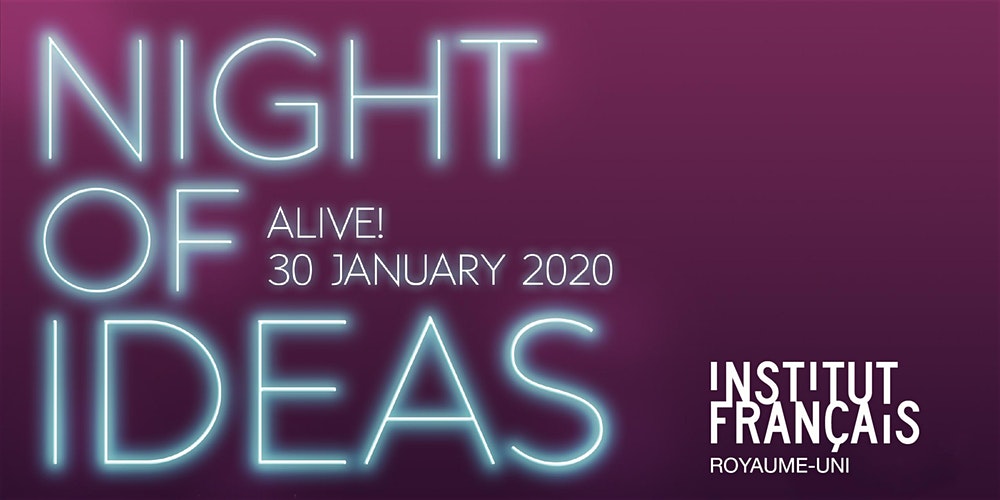